Size Matters. Big Time! The size of the Frontal Lobe, that is. Our  frontal lobe is larger in reference to the rest of the brain, than in any other species: It’s almost 40% of a human brain, about 15-17% in great apes, about 7% in dogs and just 3% in cats.

The frontal lobe (in red), is the ‘executive’. It’s the part that decides on actions. The area where planning, speculating, and inventing takes place. It’s where intent is. And it’s its oversize in reference to the rest of the brain that is unique only to us humans.

It is the frontal lobe’s key role in driving our actions, that earned it the unbelievably violent treatment used in sever mental illnesses in the 40s and 50s, named lobotomy. And as this blog is mostly peace and love, I’ll leave it to the horror genre lovers to read further…

But what does Quantum Physics have to do with all that? Is what asked myself yesterday when I was watching Dr. Joe Dispenza‘s (of “What The Bleep Do We Know” movie) “Mastering the Art of Observation“.

In this thought provoking monologue/DVD, he builds a case that bridges the gap between Quantum Physics and Spontaneous Remissions. And one of the key building blocks in the case is our power, as ‘observers’, to pro-actively observe a different outcome – of the state of our physical bodies included. 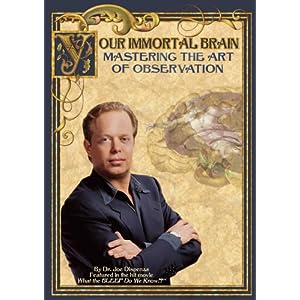 In his research, he found that people who experienced spontaneous remissions of illnesses had something very interesting in common. They all said, in one way or another, “I’m going to observe a different outcome. and I’m going to hold on to this observation, independent of the in feedback from my body, environment and time.” He explains further: “And it’s the frontal lobe, the crown of human achievements, that allows us to do that. The frontal lobe gives us permission to make a thought more real than anything else. To hold on to a concept, an idea, a vision  or a dream, independent of circumstances that exist in the world, in our body, in reference to time. And those are the traits that we secretly admire in all great people”.

And he closes the loop:

“The whole idea of separation between mind and matter, the separation between the objective and the subjective may actually begin to merge when we apply these principles together. Maybe quantum physics gives us permission to say that my observations matter. Maybe the frontal lobe, the crowning achievement of human being allows us to modify our behaviour in one lifetime, and to grow new circuits and now connections as a new place of being. And this this merging that takes place between mind and matter says this: My thoughts matters. And because it matters, it should have a direct effect on the closest thing that exists to me, which is my physical body. And if we can begin to merge these ideas, we’ve come a complete circle back to understanding that there is no separation. Mind gives life to matter.”

And he ends with:

“To learn, to remember, and to experience is out gift as human beings. By this process, we are forever changing. To stop learning is to stop changing. When we can demonstrate that we can learn the universe will never leaves us behind. Our change is our own evolution.”

Scientifically, this bridge may still be more of a quantum leap, so to speak… But intuitively, and experientially,  this idea totally makes sense to me. And science after all, is limited to the realm of what’s measurable in tools we have today.

“Even though my environment is different than my thinking, my thinking is more important.” – Dr. Dispenza

There are some fascinating experiments by Dr. William A. Tiller that explore the limits of traditional ‘time-space’ science: